Tina is the founder and CEO of Running For Real. Tina hosts the Running For Real Podcast, which has amassed over 5 million downloads and was voted Best Fitness Podcast at the Sports Podcast Awards 2021. The Running For Real Podcast is a collective of conversations about running, the climate emergency, and social justice. Tina also hosts a second, highly produced podcast with Knox Robinson called Running Realized, noted as “The ‘Invisibilia’ of running” by Women’s Running

Tina believes running is a vehicle for social change. She not only sees running as a metaphor for life, but about being vulnerable and courageous about the things that matter. That’s why she started Running for Real as a business and Podcast in 2017. In 2021, Tina began collaborating with the United Nations, and has been celebrated as one of the lead climate activists in the running space.

Originally from St Albans, England, she currently lives in St Louis, Missouri (in the US). While she’s mostly known for putting a stop to professional running shortly after representing Great Britain and Northern Ireland in a world championship and running a 2:36 marathon and 1:13 half marathon, Tina is a mother of two girls and wife to Steve. Tina’s story of her nine year battle with amenorrhea (RED-S) went viral, ending up all over the internet including People Magazine, Glamour, Outside, Women’s Health, and more.

With Tina’s vision, Running for Real is growing into a movement of runners encouraging each other to be brave, get out of our comfort zones and take tiny steps toward shaping the world we want to see. Tina has previously been voted as one of the 17 women changing the world of running by women’s running magazine and has inspired many others to speak out about their own passions. 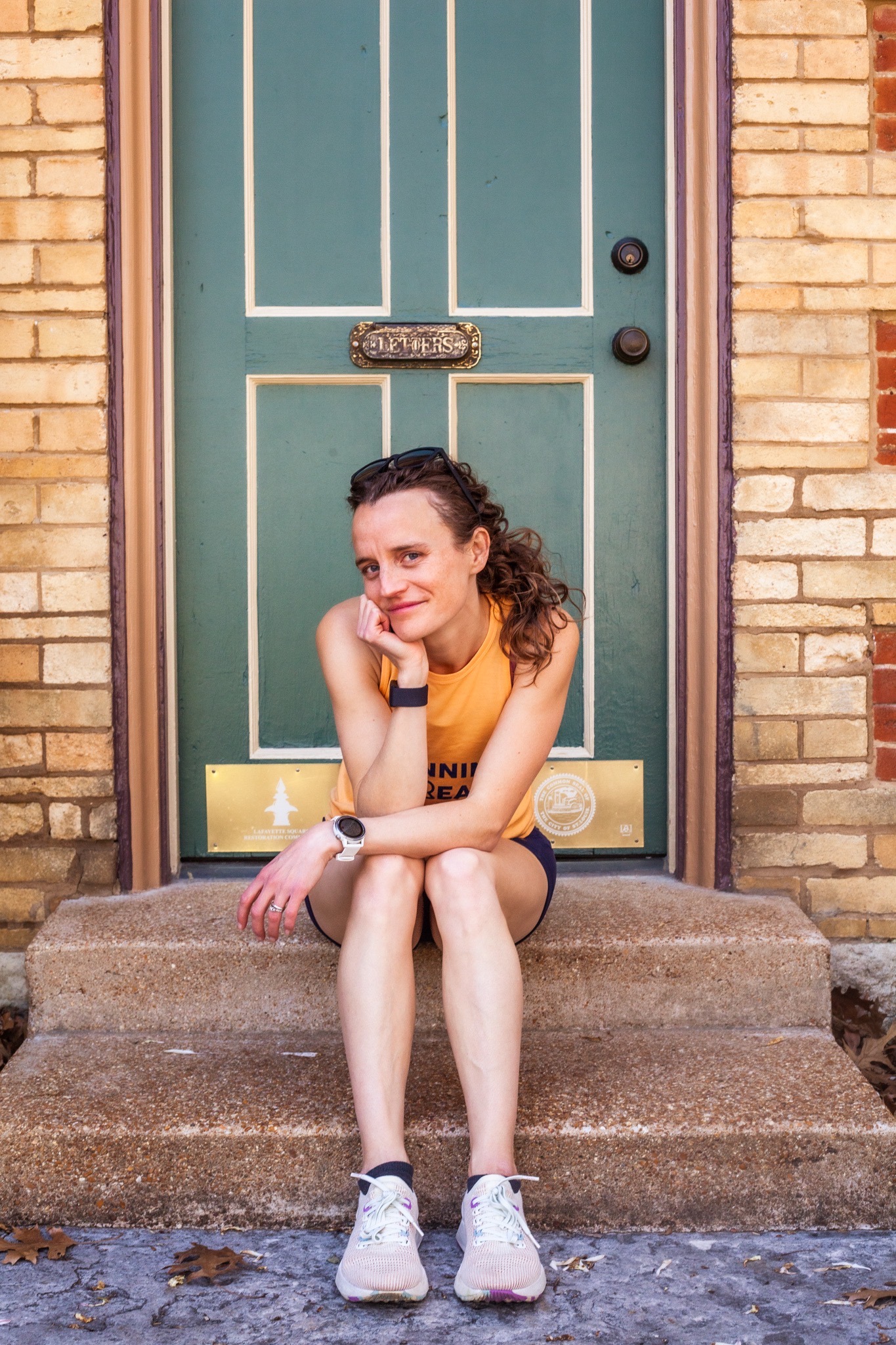 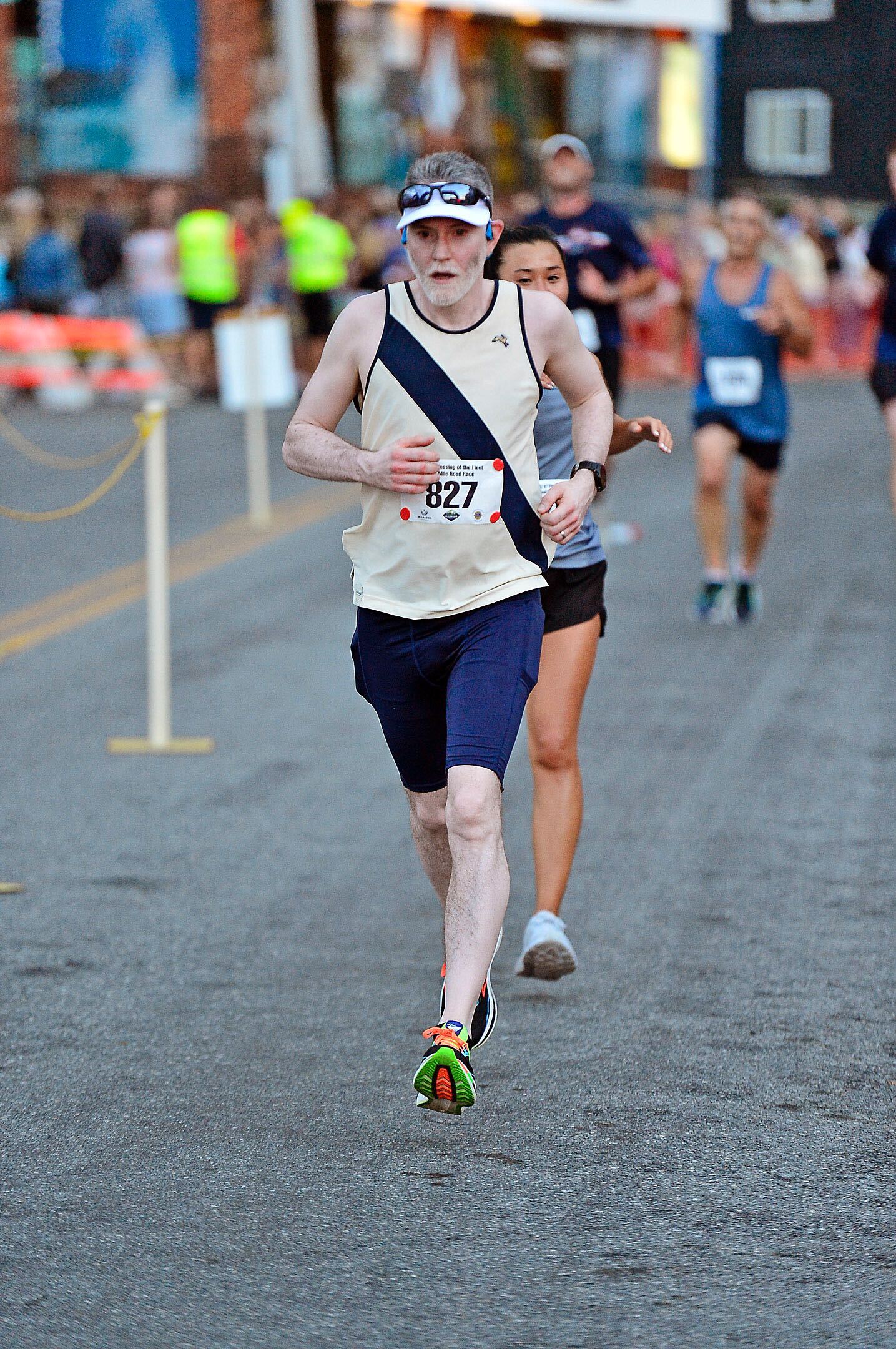 Jeremy Noessel has been the Podcast Editor and Audio Consultant for the Running For Real Podcast from the very beginning. A guitar player, singer, songwriter and audio engineer who has played and recorded with various bands, he has an ear for detail and an artist’s perspective.

Jeremy briefly ran on his high school’s varsity XC team in his freshman year. After an injury sidelined him, he turned his focus from sports to the performing arts and didn’t run again until a few years ago in his early 40’s. Having casually begun with Jeff Galloway’s Run / Walk method, he now trains seriously on the undulating topography of southern Rhode Island for race distances from the 5k to the half marathon. There’s a solid chance he’ll wind up on trails, an ultra marathon, or some outlandish excursion down the road.

Jeremy’s focus with Running For Real is for the podcast to sound great while maintaining the authenticity of Tina’s conversations with her guests. In addition to finalizing all the audio into what the audience hears, he has also helped Tina refine her equipment, recording space, and technical expertise and contributed to making Running For Real one of the top running podcasts.

Hello! My name is Sally Pontarelli, and I’m the Content and Operations Manager for Running for Real. I’ve been a member of #Running4Real Superstars since it started in 2017, so I’m excited to officially be a member of Tina’s team!

I grew up outside of Washington, D.C., where I worked for many years, first at the National Theatre and then at the John F. Kennedy Center for the Performing Arts. My husband and I wanted to live somewhere less crowded, so we moved to the foothills of the Blue Ridge mountains.  I worked for Bluegrass Unlimited magazine until reversals caused by the pandemic forced us to close our doors. That was a blow, but I’m thrilled to be starting on this new chapter of my life!

Besides running (of course!) I enjoy reading, gardening, and doing genealogical and historical research. 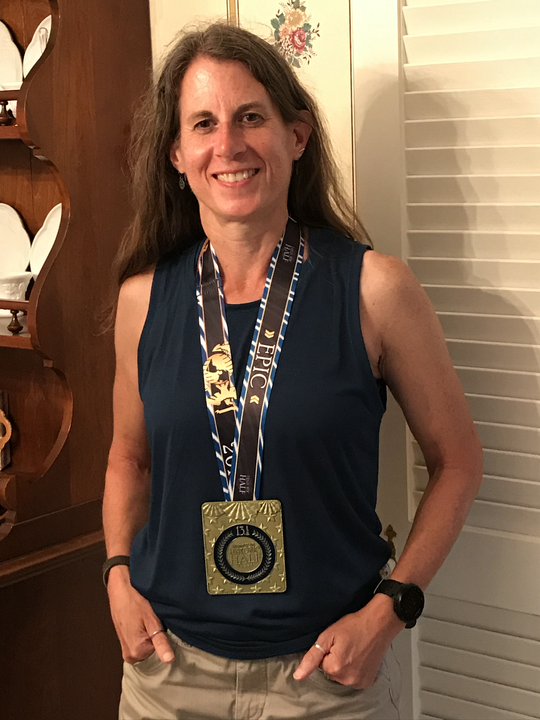 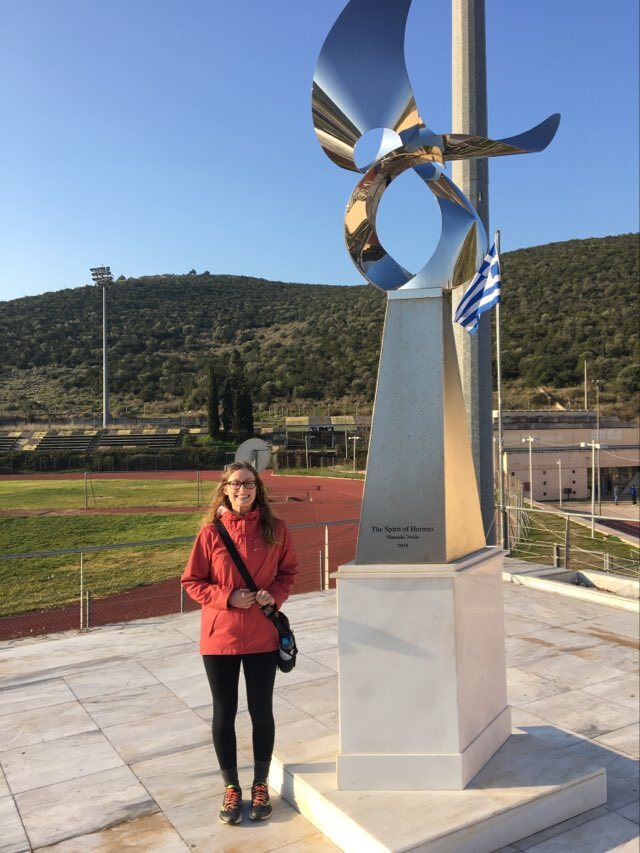 Hi, I am Kat, the Community Manager here at Running For Real!

I grew up on the Canadian prairies, but I am definitely a nomad at heart; I have backpacked across 20 different countries and am looking forward to exploring more places again soon. I also love challenging myself through running and have completed races ranging in distance from 2 KM to 59.2 KM with (more even more importantly) post-race snacks ranging from pierogis and tubs of honey to cake and Girl Guide cookies.

One thing that I’m really passionate about is creating safe and inclusive communities that give everyone a space to truly belong and feel that their story and voice matter. If you’re not sure how to get involved with the running community or where you fit in, if you want to talk more about what community means for Running for Real, or just plain want to talk running, please feel free to reach out anytime!

Maria was born in Bogota, Colombia and currently lives in Austin, Texas. She considers herself a multi-hyphenate and is a triathlete, reader, musician, writer, photographer, vegan baker, and bikepacking lover. Her favorite races have been an Ironman 70.3 in Florida and a 10 mile open-water swim in Vermont. In addition to R4R, she’s also co-creator of Prickly Pear, a consultant with CultureCircle, and co-leader of November Project Austin.

What Maria loves the most about Running for Real is the intersection of running with humanity. She believes in the power this community has for transcending differences and contributing positively to the world around us. Keep up with her adventures. 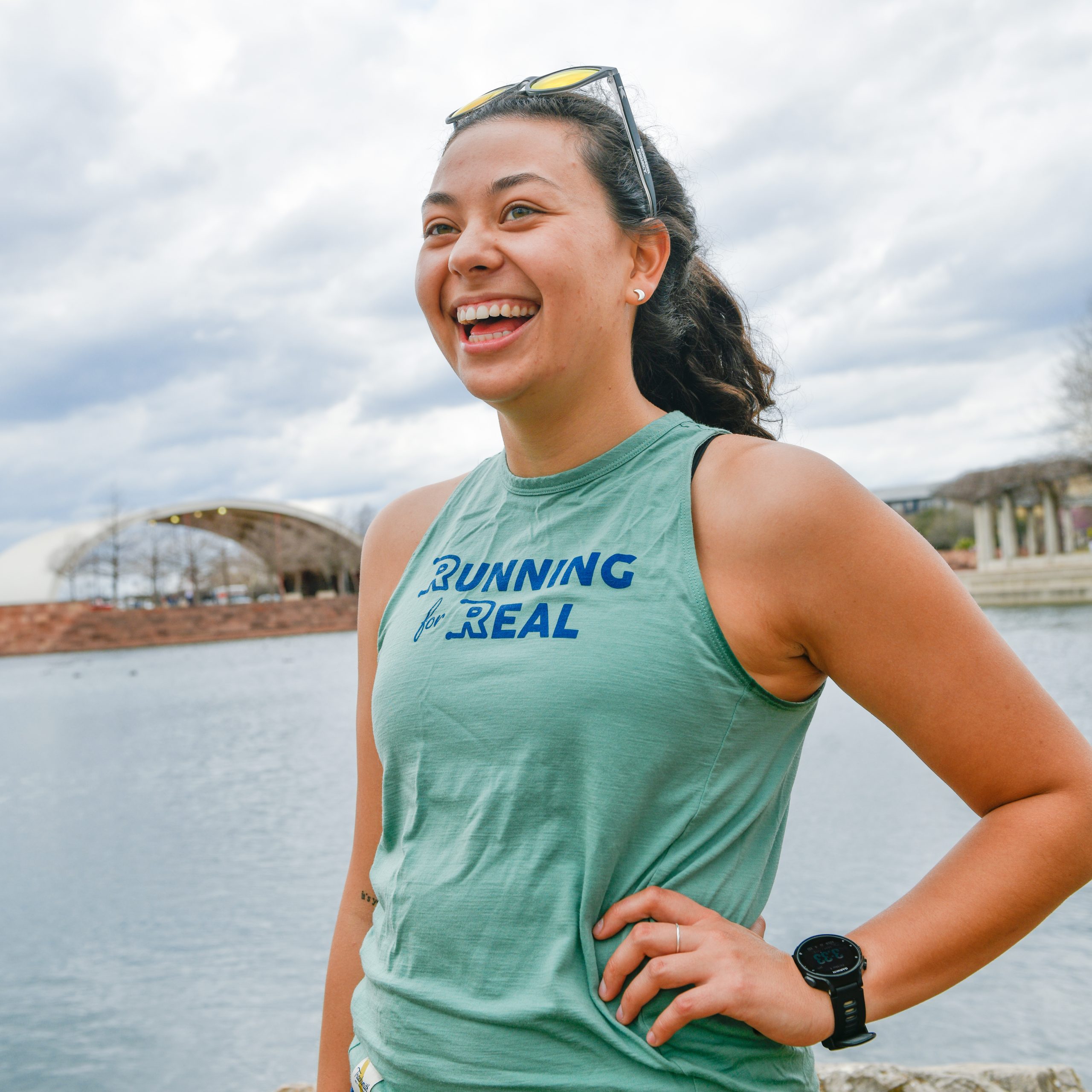 I’m Kelsey and I’m super pumped to be the Head Designer here at Running For Real. I live right outside the Twin Cities in Minnesota and can’t believe that I’ve ran four marathons. My dream to check off is running all of the World Major Marathons (and I’ve got two under my belt already!). When I’m not running, spinning, or lifting, I enjoy cooking, reading library books, and eating all of the chocolate!! I also have a passion for travel and truly believe that it is the best way to discover yourself.

One thing that ties my love for running and being creative is helping this Running For Real brand come to life. It truly excites me. In the past, I’ve worked on illustrations, logos, creative strategy, and more. Check out my other doodles and designs here.

Hi I’m Sandy, I live in St. Louis and I am a part of the creative content team for Running for Real, I enjoy all things fitness, traveling to new places, and love to spend time with family and friends. 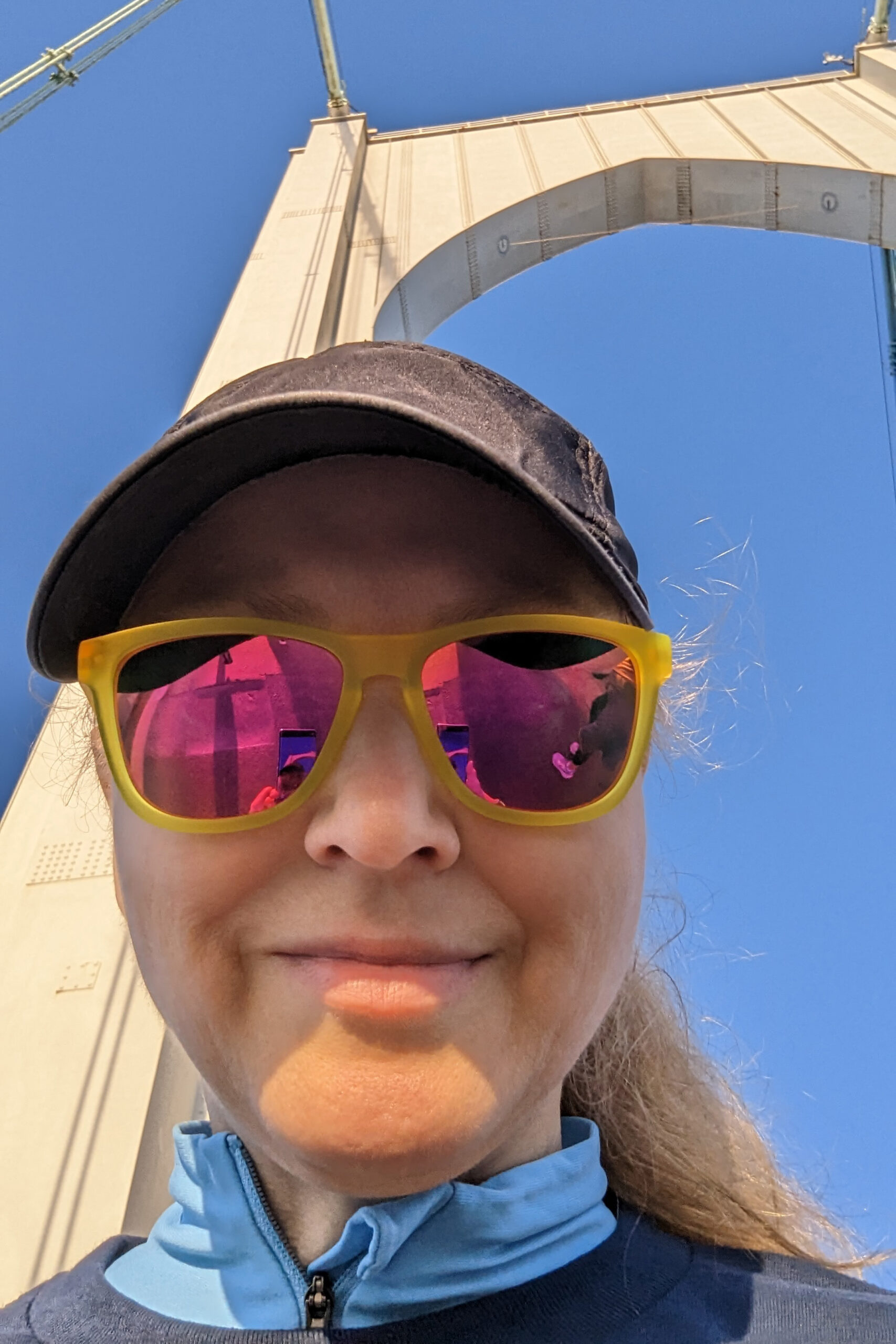 Hi! I just joined Running for Real in early 2022 and am loving being part of the team! I’ve previously worked in government and finance and am delighted by this opportunity to embrace the more creative side of myself.

I am originally from Rhode Island. I’ve lived in Arlington, Virginia and Sydney, Australia, but like many Rhode Islanders, I just couldn’t stay away and eventually moved back home. I didn’t start running until I was in my 20s and love doing the occasional trail run and any race that has beautiful scenery or a fun element to it like running over the Newport Bridge. Other passions include travel, reading, board games, visiting aquariums, and stuffies with hot sauce and lemon on top, of course!

My name is David Skytte and I’m an honorary member of the team as one of the admins in our community Facebook group. I often joke it’s the easiest job in the world as our members are super-friendly and I rarely have to interfere.

I’m a Danish expat living in Madrid, Spain, and my time is usually divided between teaching, running, and meditating. I’ll happily delve into life’s big questions and tacky dad-jokes with equal enthusiasm. I’m in general a happy-go-lucky guy, and I find immense joy in helping others learn, grow and overcome difficulties through my job, my friendship, and interaction with the community.

The final part of my puzzle is having a loving girlfriend and loveable cat – both whom need to be fed on a regular basis. 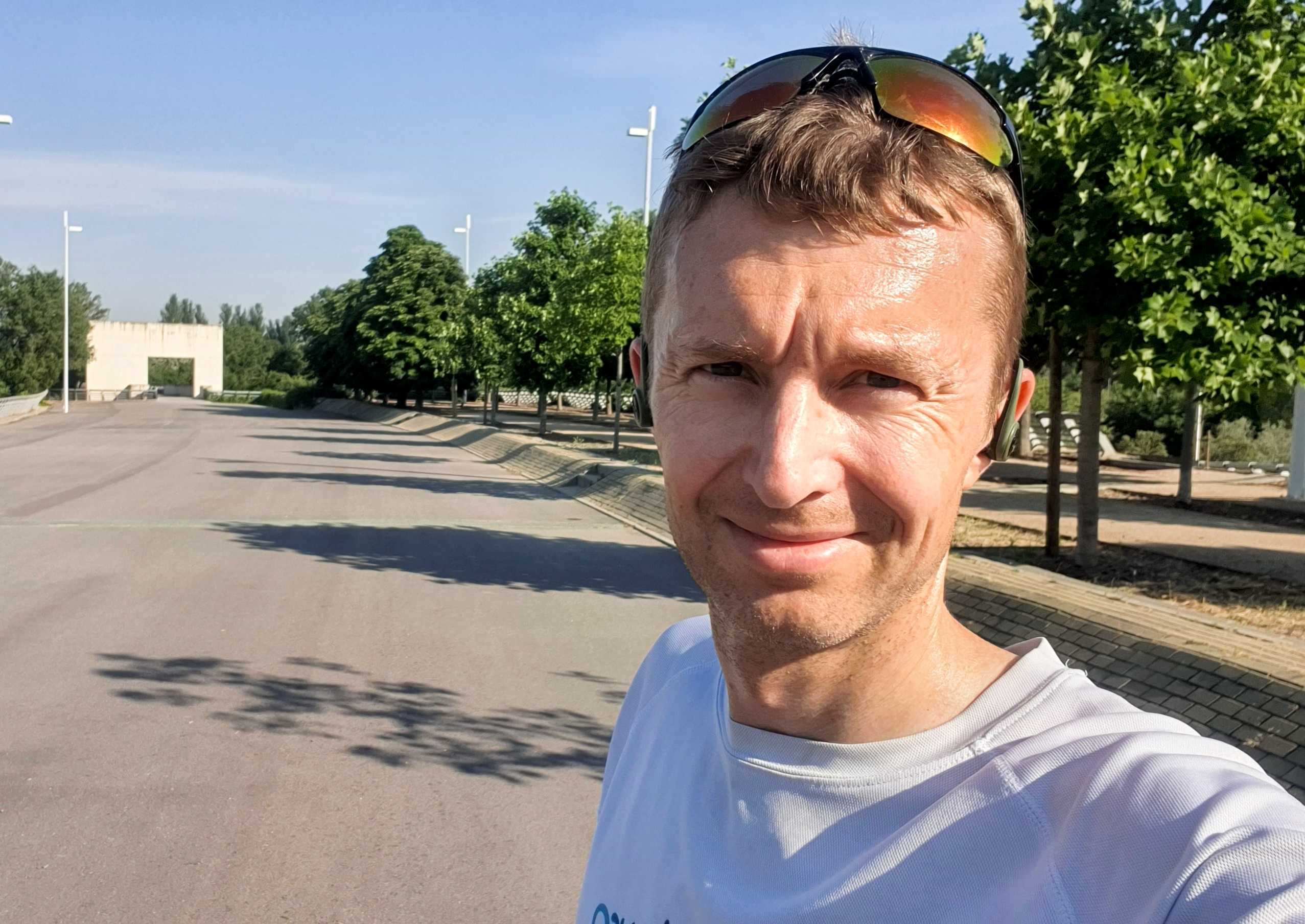