Sidney Baptista : The Business of Inspiring People to Run – R4R 316

Sidney Baptista is a coach, leader, and activist, and the founder of PIONEERS Run Crew in Boston.  He’s also the founder and CEO of  PYNRS Performance Streetwear, which was selected to be part of REI’s “Navigate” program and won the grand prize at the Black Ambition Gathering on the Vineyard competition this year. Yet despite those successes, as an entrepreneur, he still faces challenges.

Running is becoming more diversified through groups like PIONEERS Run Crew, but for the most part, apparel companies haven’t responded. Recognizing that void, Sid created his own label, PYNRS Performance Streetwear. “The more that running is growing in communities of color, we want to be able to provide product that goes along with the experience of what we’re doing in the running space. Product that fits the bodies of the people running and also designs and our culture in running. So I’m very passionate about the full experience of running; not just getting out there, but also what you’re experiencing out there.”

PYNRS opened a limited-time pop-up shop in Boston this past April, to coincide with the Boston Marathon. It was hugely successful. “We did the biggest sales numbers that we’ve ever done,” Sid says. “So many people came through and supported us and it was like a star studded event.” Yet after the shop closed, he continues, “I was just thinking about what didn’t go wrong or who didn’t come and who didn’t support, and I just was like, ‘What’s wrong with you? You’ve just had all the success, and it’s not good enough and what’s going to be good enough?’ So then I had to reevaluate what I was doing.”

He decided to take a break from social media and the negative thoughts it can engender. The experiment had mixed results. “Getting off social media tanked my business, so on one end, it was good for my mental health. On the other end, it wasn’t good for my business because we did nothing while I was away, in terms of sales.” He came to the reluctant conclusion that for PYNRS to be successful, he needs to be the face of it.

He was also taught that lesson in REI’s Navigate accelerator program. It’s one element of their Path Ahead Ventures, which offers support to startups led by people of color. As Sid explains, “They know that the future of the outdoor industry lays on a more diverse group of people experiencing the outdoors and also redefining what the outdoors is, the outdoors being just outside your door.”

PYNRS was chosen to be one of the initial cohort of six companies taking part in Navigate. REI gives them an equity-free grant, access to additional funding, mentorship, and the services of marketing firm R/GA Ventures. It’s a very different approach from what other brands have done. “They’re not creating owners in the outdoor space or in the running industry,” Sid observes. “They’ve provided marketing support. They’ve signed teams, influencer deals, they’re putting them in their marketing. But at the end of the day, yeah, you put me on a poster, you put me in your store, but who owns everything that’s coming in?”

REI, on the other hand, “They’re not trying to use me for marketing to drive people into their stores, they’re like, ‘Let’s make sure that you are a successful owner in this space and that we can carry your product and grow your brand.’ I think there’s a difference there, as we get to retain some of that ownership of what we’re creating, which doesn’t happen with all of the other programs I’ve seen.”

This summer Sid also won the $10,000 grand prize at Black Ambition’s Gathering on the Vineyard, a competition that Pharrell Williams established to help Black-owned businesses with capital and exposure. Reactions have been striking. “What I’ve noticed is that when I say we’ve been picked up by REI, if you’re a white person, you’re like, ‘Oh my God!’ If you’re a Black person, 90% of the time, you’re like, ‘What’s REI?’ When I tell people I won the Black Ambition, white people are like, ‘What’s that?’  Black people are like, ‘Oh my God!’, so you have both sides; it’s wild.”

Sid has a busy autumn and winter planned. It will be PYNRS’ busiest time, thanks to marathon season, and his wife is expecting their second child, a daughter, in December. After several injuries, he’s back to running two or three times a week. He’s focusing on keeping the right perspective. “All my friends outside of running are like, ‘Dude, you run so much!’ ‘Trust me, man, I don’t run enough.’ But for me, it’s the pressures around running, will you ever be as good as you were before the injuries? Will you ever get back to that? You know how it is. And I just can’t deal with that. So I tell people, they’re like, ‘Are you running this marathon?’  I’m like, ‘I’m in the business of inspiring people to run.’”

Thank you to Allbirds, Athletic Greens, Together Runs and Weekly Strides for sponsoring this episode.

You can see their entire collection on their website, and be sure to check out their latest running shoe, the Tree Flyer. 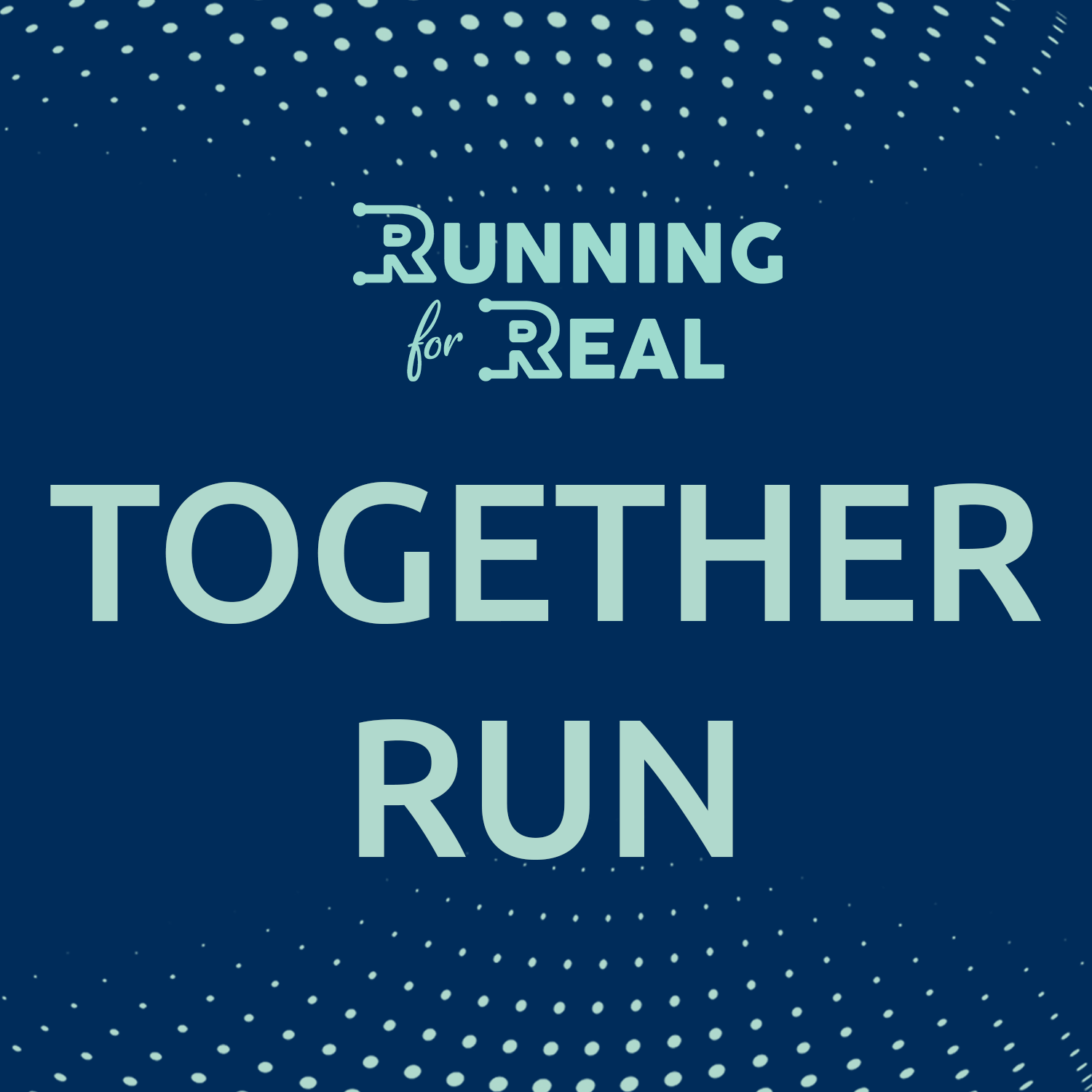 Together Runs give you company on a run, even when you’re by yourself.

They’re for those times when you don’t have someone to run with, but you don’t want to feel alone.  Tina  accompanies you all along the way, sharing conversation, mindfulness practices, and helpful tips  – it’s as close as you can get to running alongside a friend without  being next to them in person!

Have a question about running? Ever wondered what a Running for Real guest has been up to since you heard them interviewed? Would you like to get to know the Running for Real community better? On Weekly Strides, Tina will answer answer your questions, catch up with previous podcast guests, and chat with members of the #Running4Real Superstars. The episodes are short, fun, and rewarding – the podcast equivalent of runners’ strides!

Together Runs come out on Monday and Weekly Strides is released on Wednesday. You can find them on your favorite podcast player and on our website.

“Thank you” to Sidney.  We look forward to hearing your thoughts on the show. 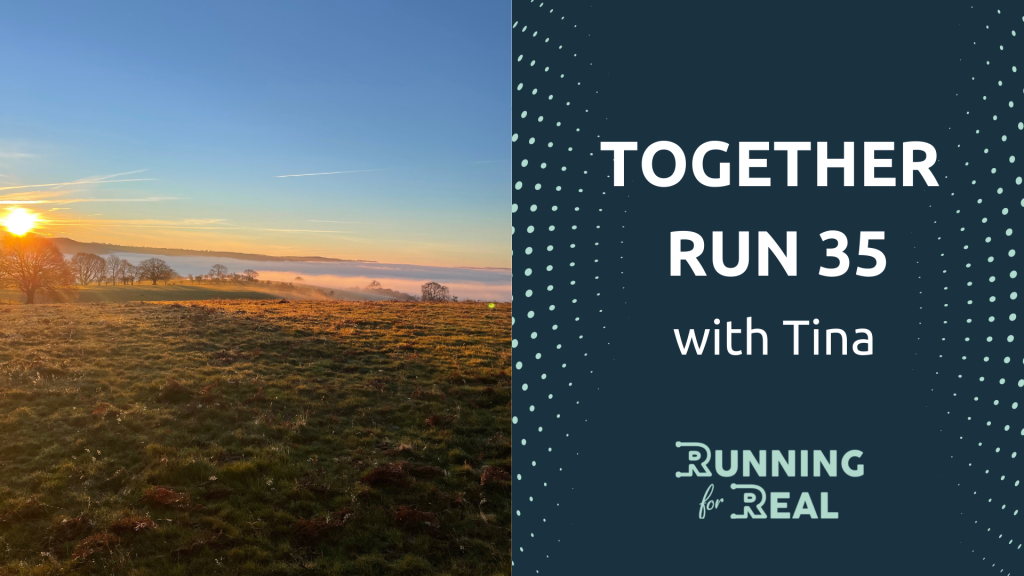 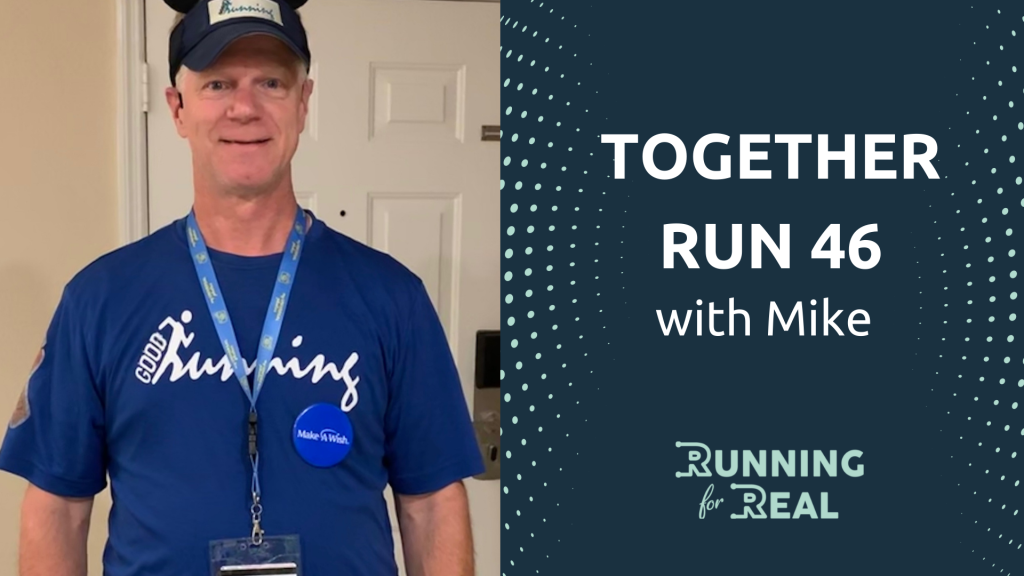 Together Run 46 with Mike 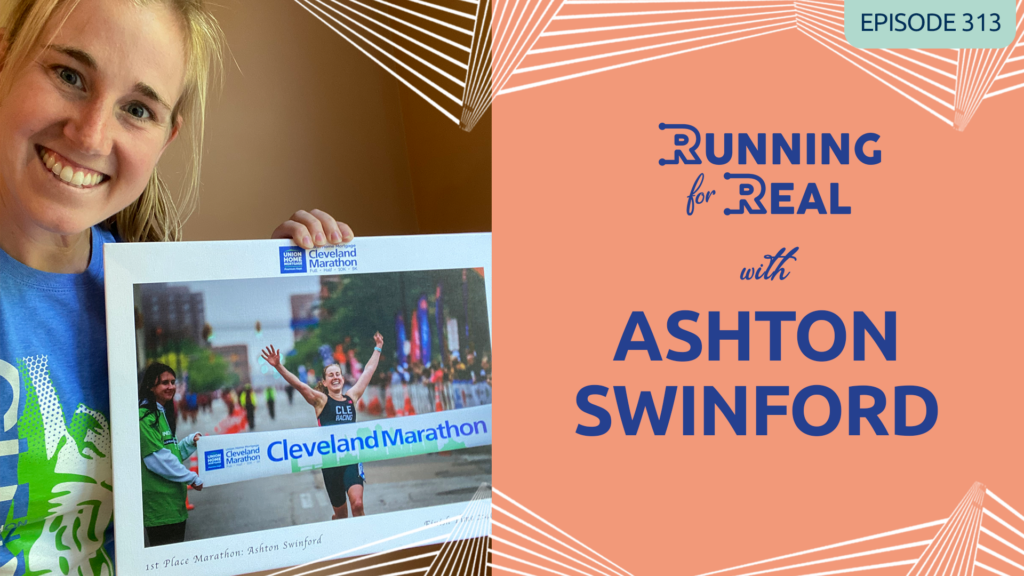 Ashton Swinford: To Be a Better Version of Myself – R4R 313